View of Gold Coast Hinterland from Beechmont, QLD – this is only 35 km from the ocean. 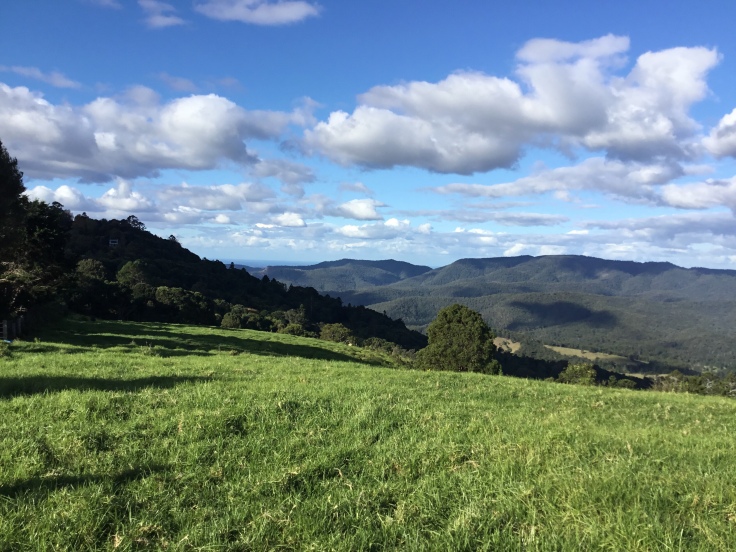 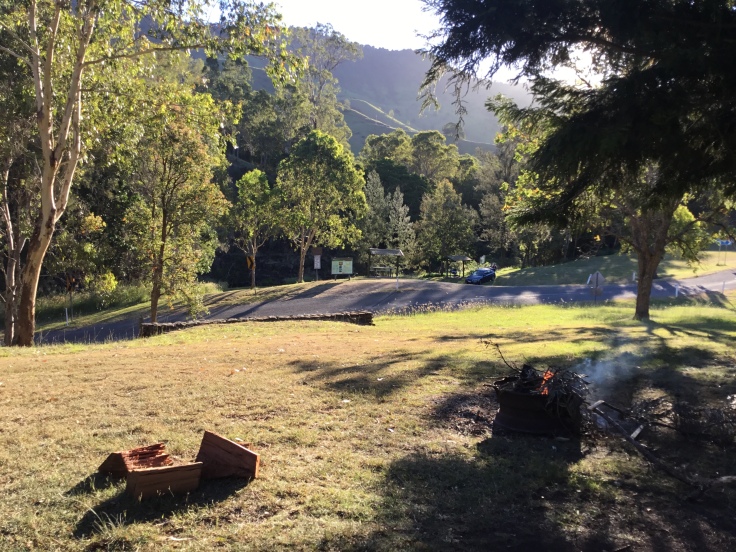 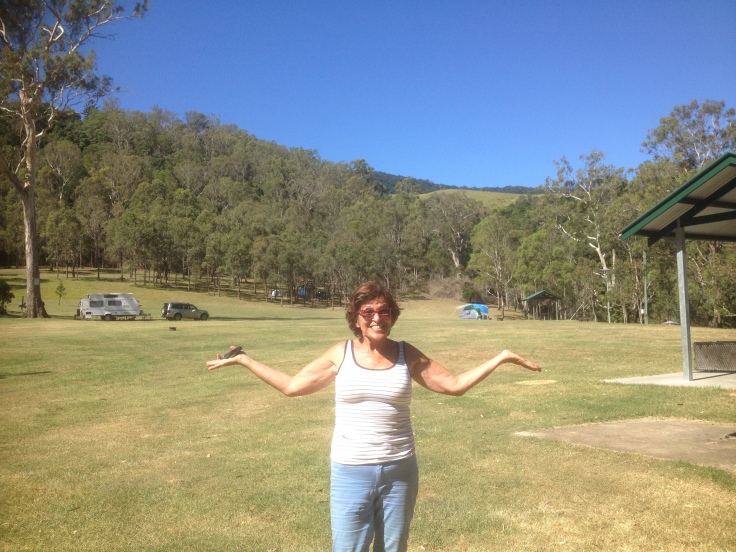 Our destination from the Gold Coast was the famous Waterfall Way in NSW near Coffs Harbour. I liked the little townships of DORRIGO and BELLINGEN.

We spent our last night in Coraki, NSW, before heading home to Burleigh @ the Gold Coast. Great trip doing 1500 km mostly through New England NSW and the Waterfall Way. 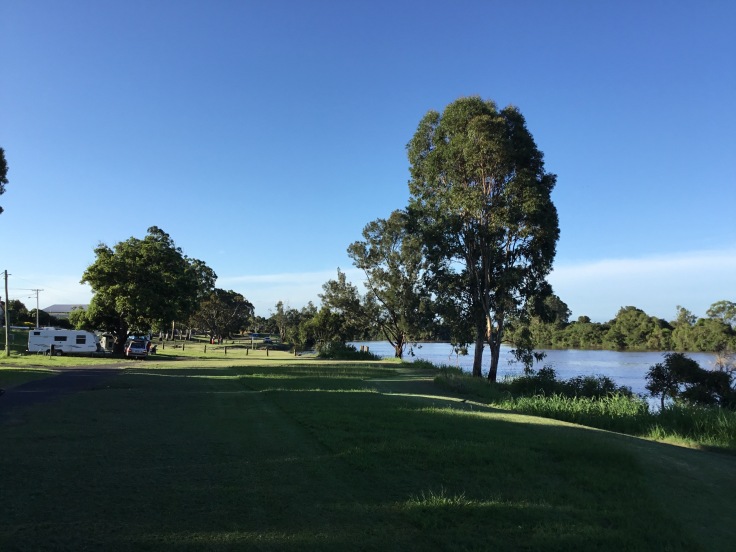 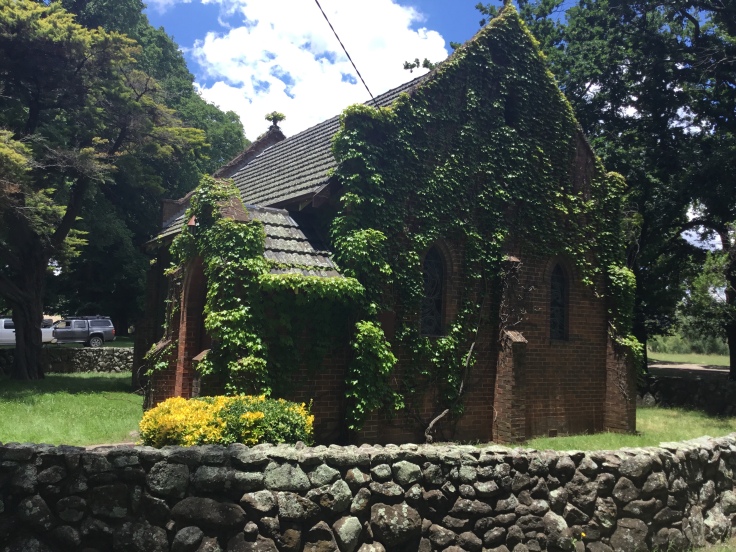 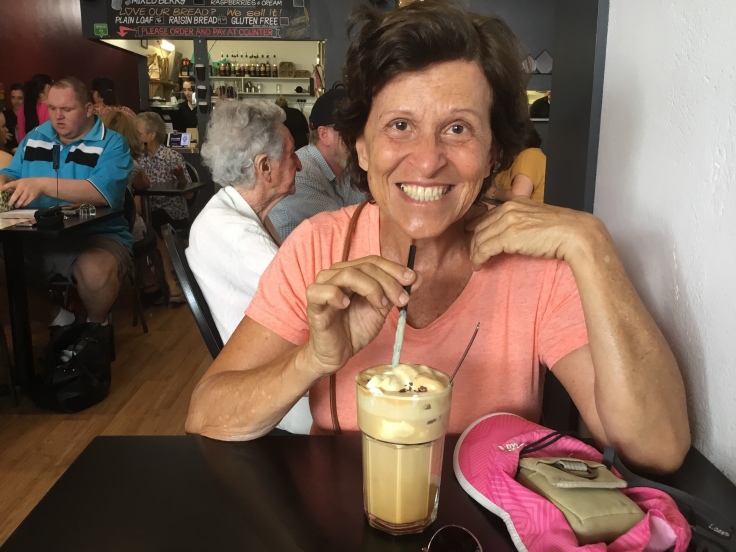 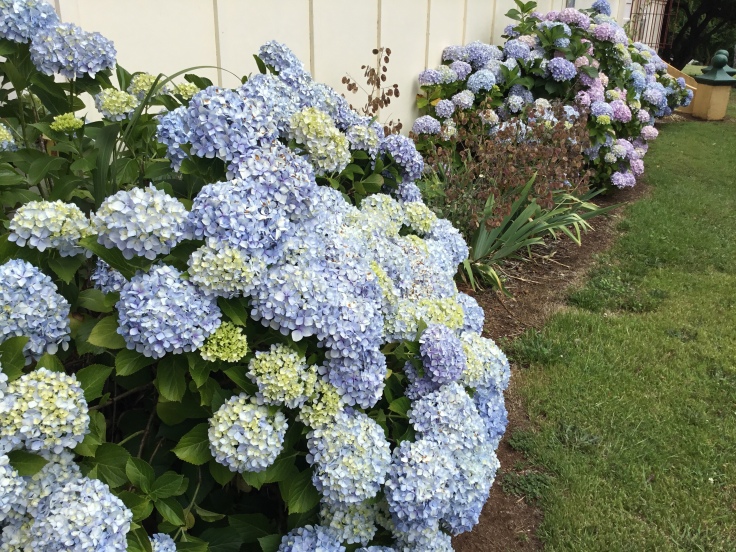 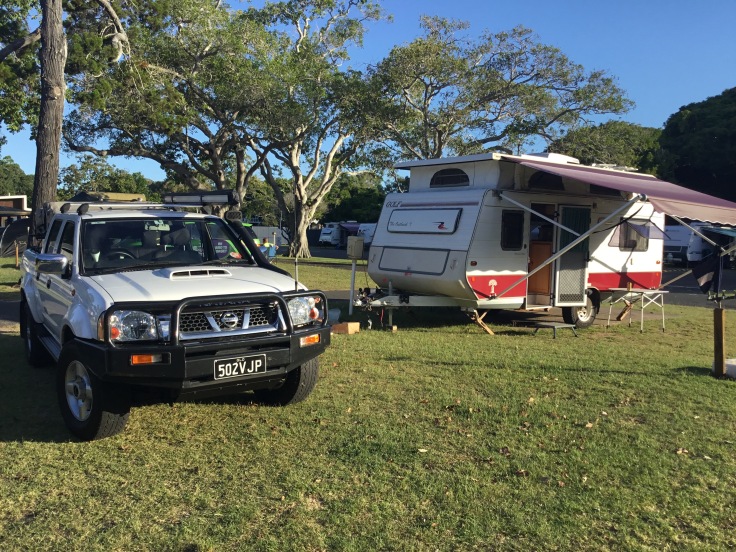 This French RAPIDO is a beautiful and small pop up caravan which is not too long and too heavy, my brother and his family have used it for years. Before they sold it, I had a chance to test it in Croatia and Sardinia – two short vacations: Easy to tow and easy to set up – in fact in minutes. And the beauty of this model: We pulled out the kitchen and cooked outside. A fantastic and nearly perfect solution for European longer trips, I would even buy the latest and newly rebuilt version and use it for a few years and then sell for an appropriate amount – no real loss. 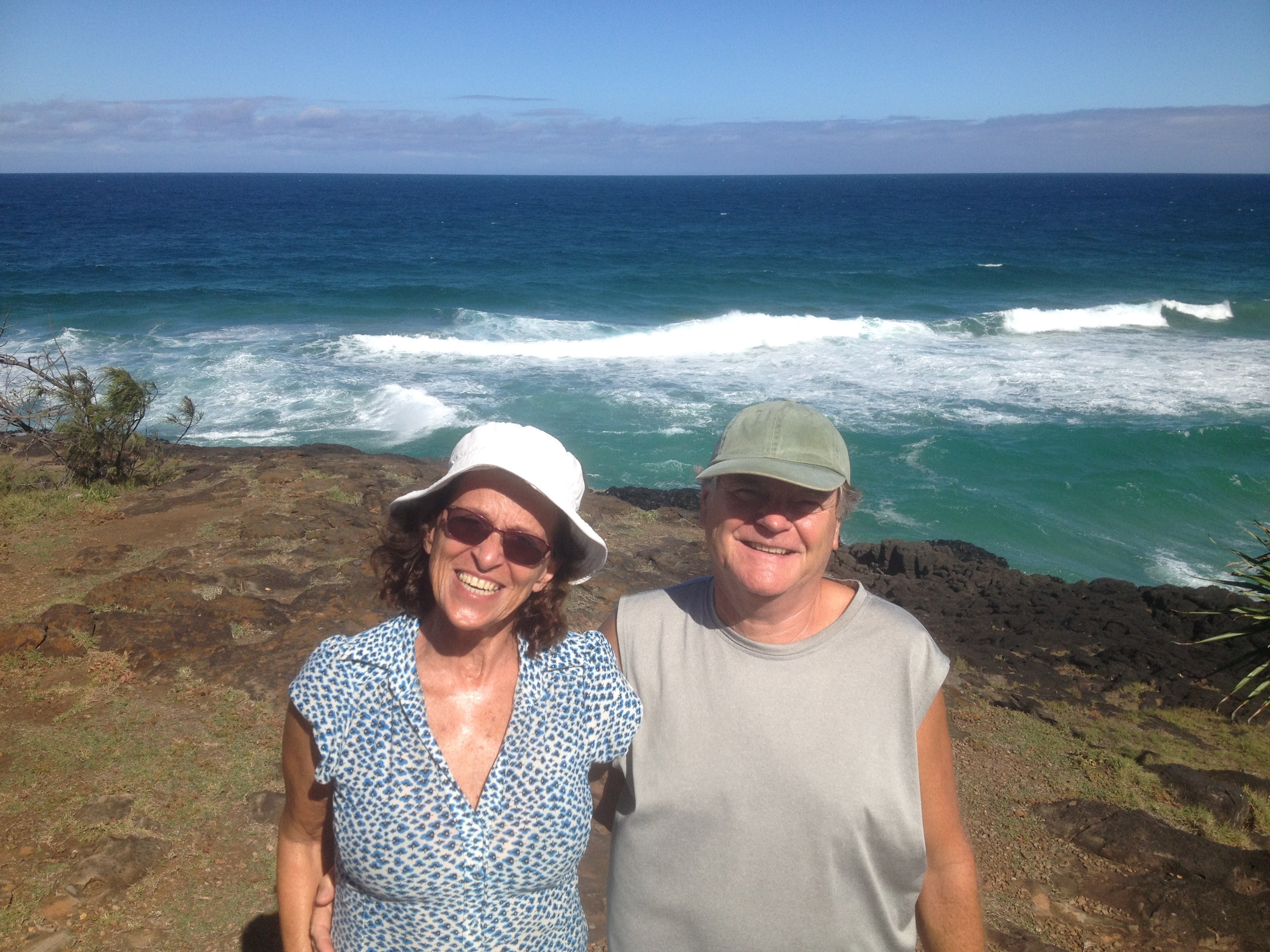 These pictures are examples to give you an impression and what I am gaining from outdoor life, travelling and camping. Best yours 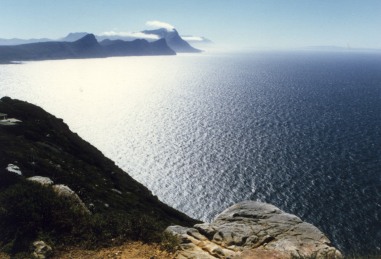 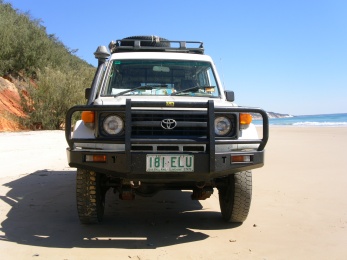 And here another dream

From Live2Camp thank you Matt Bloomfield

Check out the map of northern NSW here:
https://www.live2camp.com.au/copy-of-north-coast-region

Travelling has been part of my life since childhood. My father, born in a small community of farmers and 1st born son of a farmer himself, took my brother and my 2 sisters on extensive camping trips throughout Europe since 1956, when he bought his 1st car, a VW beetle. I remember 6 weeks of summer vacations on a Baltic Island Alsen, Kegenes in southern Denmark, only 2 hours drive from our village where he was a schoolteacher. We always went with friends and families, so groups of children of 10 and more met again year by year. This campsite was just a meadow with beach access, and on the site were around 10 families with children, later more camping fanatics, of course. The only toilette was a 1 km walk away. Our family paid one Danish crown per day camping fees in 1956 and the years after.

Later my father built his own caravan during school holidays and asked my brother and me to assist him. When we arrived on camping sites all over Germany and Austria mostly on small places along the Rhine, Mosel or lakes around Easter and in our autumn holidays, people used to stare at our VW beetle and the DIY compact caravan without any windows looking incredibly ugly and like a tin box: We had to lift the roof and the top had self made tent walls. While my younger sister, born 1956, used the third bed in the caravan, my brother and I had our own tent and felt very proud and independent. I remember long holidays, in which we both explored the area around like we had done in our own village in the middle of Schleswig Holstein. The last camping trip for me was at the age of 17, when I joined a huge crowd of young boys and girls (more than 30) at the lake of Ossiach, Austria. One day some of us even swam across the lake and back, while our red rubber rowing boat accompanied us for safety reasons.

During my first 2 semesters while studying at the University of Kiel, North Germany, my father decided it was time to build his own house for his own retirement and for his 4 children, who would certainly study at the university in Kiel. We had lived in the school house for the past few years, so he found a neighbour in our village willing to sell parts of his front garden. From this place, my father had wisely planned, his four children would be able to cycle to the university without having a car. Money was short those days, and he was the only breadwinner, while my mother was busy looking after her four children, doing the household including gardening, washing and cleaning, shopping and cooking. She was always busy like my father. I rember exactly the first half of the day from 6.30 / 7am to 2pm, when we all met again for a cooked lunch and a more or less “free” afternoon without any lessons or meetings or appointments.

Later when I had my own driving licence at the age of 18 and had left school and the army after 2 years (1970), I drove my 2 chevaux citroen to Dubrownik together with two school friends and later with my girl friend to Athens, Istanbul and back, always camping or even sleeping in the car (we took the seats out and placed them next to the car).

When the house near Kiel was nearly finished – my brother and I had spent every minute with bricklaying and other DIY Tasks for about 12 months – we took a few weeks off and went to northern Spain and France by car: Barcelona, Pamplona, San Sebestian, Lacano at the ocean and back home via Paris.

When working as a teacher in Windhoek, Namibia (1998-1994) , we travelled a lot with friends exploring the country off road and camping in the most beautiful Namib desert and at the Skeleton Coast. We had bought an old Landrover and a Volkswagen van, which we used for our longer trips into the Republic of South Africa (RSA), Botswana, Zimbabwe, Victoria Falls and through the Caprivi. I had brought a roof tent from Germany, so mostly we slept on the roof of either the Landrover or the Volkswagen Van, and our little children, 6 and 8 years old on arrival in 1988, could sleep safely in the locked car.

Before starting my teaching job in Germany again (1994), we decided to take our two children, now YR 9 and 10 students, “around the world”: Our plan was to fly from Hamburg to California, then on to Auckland (NZ) and 5 months later back to Germany via the USA.  Later, during her first and only visit in Brisbane (Christmas 1998), my daughter said to me while walking along the Brisbane river with us: “This was one of the best decisions you’ve ever made”!

Working for Education Queensland in Westend, Brisbane (1998 – 2005),  we mostly travelled by airplane carrying laptop and beamer to the hotels and schools for our inservices, the face to face meetings with Australian teachers of German, both State and Private Schools teachers. However, I toured Queensland roads  whenever possible with my Troopie to visit the National Parks in Queensland, the Hinterland and last not least Fraser and Moreton island, one of my favourite places for camping.

Twice I drove my Landcruiser to Melbourne and rounded Tasmania, and once I drove to Canberra for a two week seminar. When I had finished my work, I headed for the coast and drove North via Sydney back to Brisbane.

One of the more adventurous trips was a camping trip to Cape York. My son had come again from Germany with his girl friend, had already been to the Red Centre around Alice and the Uluru and was eager to see more of the outback in Queensland. As I did not have the time to spend weeks on the road, they drove my Troopie North to Cairns, where I arrived by plane to meet them. We spent one week driving north beyond Port Douglas, finally reaching the Cape, then one week back and another week at the beach and along the road for a relaxed camping vacation – a trip I will never forget. My son, his girl friend and I were so close to each other, that all the months I had spent in Brisbane without them during this year, were compensated for by this single trip.

To see the picture pls visit my BLOG on WordPress.

This work is licensed under a Creative Commons Attribution-ShareAlike 3.0 Unported License.